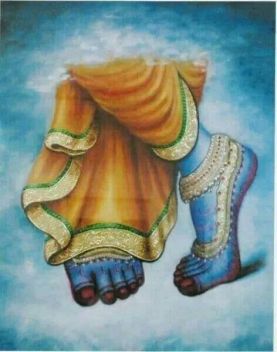 Saranaagathi means “Surrender Unto the Lord”. Surrender also called as “आत्मनिवेदन or AtmaNivedana”,  is the highest form of Bhakti or Devotion, where the Self is surrendered to God in entirety. This Surrender is the culmination of the sadhana of Bhakti and Jnana.

Saranaagathi in its true sense is the ultimate aim of all branches of yoga – Karma, Jnana and Bhakti. In Saranaagathi, the devotee is just like a small child, barely months old, which surrenders itself completely and exclusively to the mother’s care, because the child is innately assured of mother’s caring for it. The child does not depend on its self even for a small work. The devotee also becomes completely child-like, entrusting everything into the hands of God.

In most of our day-to-day lives and actions, we have very little “ Saranaagathi” to the Divine. We act as independent beings, and perform all actions of grown-up adults, with the feeling that we have enough mental and physical capabilities to take care of ourselves. But, there is also a “Surrender” that we do here, but in the reverse direction. We surrender to the world around us. We surrender to our temptations, to our sensual pleasures, relationships, emotions, what to speak of big things, even to the smallest thing like “taste buds”, we surrender ourselves. We bend our inner nature for the outer-world. We take the first step towards “Saranaagathi”, in one Swamiji’s words, only when we bend the outer to the inner.

Lord Krishna in the Bhagavad-Gita Himself gives the gist of Saranaagathi or self-surrender in “Moksha Sannyasa Yoga or The Yoga of Liberation by Renunciation”. (Chapter – 18, Sloka: 66).

“Abandoning all duties, take refuge in Me alone; I will liberate thee from all sins. Grieve not.”

With the inspiration of our Revered Gurudev Sri Swami Sivananda Maharaj, we have named this effort of ours on the internet as “Saranaagathi – Surrender to the Divine”. We pray to God and Gurudev to bless us with his Grace in our journey towards “Saranaagathi”.

“Work ceaselessly for the Lord but surrender the fruits of all actions to the Lord. Take the Lord as your sole refuge. Live for Him. Work for Him. Serve Him in all forms. Think of Him only. Meditate on Him alone. See Him everywhere. Worship Him in your heart. Consecrate your life, all your action, feelings and thoughts to the Lord. You will rest in Him. You will attain union with Him. You will attain immortal supreme peace and eternal bliss.”

“True and sincere surrender unto the Lord is the essence of Bhakti (God-love). ‘I am Thine, All is Thine. Thy will be done, my Lord’ – This is the best Saranaagathi Mantra or prayer of self-surrender. Seek His will. Do His will. Surrender to His will. You will become one with the cosmic will.”